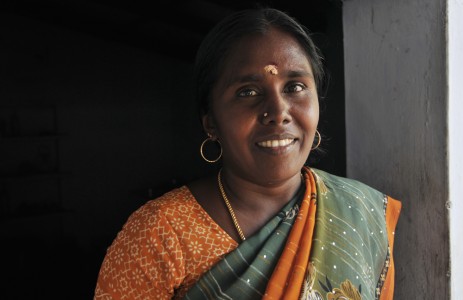 Somu has lived in her village for 20 years. She is married with three daughters and was a founder and leader of her local women’s self group.

She said: “Many of us women in the village previously had loans from money lenders and we had to pay weekly interest, which consumed three quarters of our hard-earned income. We used to have to pay 18 per cent interest on the loan back to the money lenders.“

When they formed the group and started to build savings, women could start borrowing money for just 2 per cent interest.

Somu said: “Now we have this option, most of the 65 women members in the group have become loan-free and their lives have improved in many ways. Some women have started breeding cows and goats.”

Before she got married and moved to the village, Somu had been studying at college. She was one of the few women in the village to have received such a high standard of education.

She’s noticed how the attitude towards education has changed significantly since the self-help group was formed.

She said: “Recently after balwadi (pre-school) tuition began, the interest in educating children in schools has increased considerably. Three youngsters, a girl and two boys, have now gone to college from this village.”

On a personal level Somu is proud to be the representative for the women of her village.

“When the group supports and believes in me and sends me forward to represent them, I feel responsible and passionate about the group.”

Read more about them here or watch a film about the groups. If you would like to help us support more women like Somu then you can donate below.